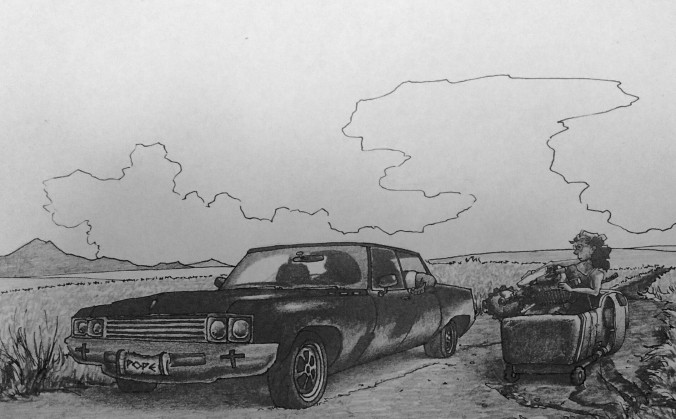 The robot was spending the majority of his time riding in the tub and was very upset about it. He bumped anxiously against Kappy’s leg as she drove, trying to convince her that they should really be heading diagonally away from the road. Although they were surrounded by gently rolling hills and could have followed the robot easily on his desired path Kappy knew they were coming up on Moughte ravine and despite the robot’s optimism, if he dropped into the ravine he’d never come out.

The Moughte ravine was an extremely deep canyon, either side nothing but steep crumbling slopes of loose red rock. The few dirt tracks that actually led into the ravine were poorly maintained and better suited to pack animals than to Kappy’s tub or Miles’ tractor.

The ravine was infamous for another reason as well. The city of Moughte sat directly above the ravine, but had been built on the ruins of another city, one from the old world whose name had been lost. The world was littered with old cities, dark stretches of land marked for hundreds of miles around by hand made signs warning travelers away. Signs warning them of old metal above ground.

Moughte was the one exception for the ravine had made the new city possible. The ravine’s inaccessibility had provided an invaluable dumping ground for the countless tons of metal that had to be extracted from the old city before Moughte could be built and inhabited. The bottom of the ravine was now a silent repository of rusting metal, although the inhabitants of Moughte swore that on silent nights they could hear the crash of metal shifting and crawling, trying to claw its way up the sheer rock walls.

Miles wasn’t happy about the robot’s travel arrangements either. He didn’t trust the robot after what it had done to the white truck. At his insistence they were now stopping every hour to let the robot roll away from the road, hopefully to trick it into thinking it was making progress. It kept Miles happy and didn’t waste much time so Kappy had put up with it. For all she knew it kept the robot happy too.

Traffic was rare, but carts and other ramshackle vehicles weren’t an uncommon sight. Very occasionally a truck or car would rumble by as well. Kappy and Miles did their best to make sure the road was clear in both directions when they let the robot out of the tub, but towards the middle of the afternoon a car came racing down the road during one of the robot’s free periods and had passed them before they had a chance to get the robot hidden again. The car braked violently and came to a stop in a cloud of dust. It sat there, quietly idling while they reloaded the robot and made their way back to the road.

The car was very different from the other vehicles they’d seen on the road so far. For one, it had a glossy coat of jet black paint. With metal rusting at the rate it did, it was rarely worth the effort to add paint to anything, but the owner of this car had obviously wanted to go to the trouble. The car was large and would have been shiny a few hours before. Now it was painted a light brown with the dust of the road. All the windows were tinted black and nothing could be seen inside.

As they reached the road, the car’s tail lights flared and it backed up to pull alongside them. One of the back windows rolling down with a muted electric hum.

An enormous arm emerged from the dark interior and rested casually on the door. Muscles writhed under the dark skin as the arm moved while a large silver watch gleamed brightly against the wrist, ticking loud enough for Miles to hear from where he sat on his tractor. A deep voice spoke to them from inside the car.

“Were you just taking it for a walk?”

“Why?” rumbled the voice.

“To see where it goes,” said Kappy.

The voice was silent for a moment, thinking, then asked, “You’re heading to Moughte?”

Thick fingers drummed the metal of the door. Miles was surprised they didn’t leave dents.

“I’m intrigued by your little machine,” said the voice at last. “Had I not an urgent matter to attend to in Taggen I would ask that you indulge my curiosity now. As this is impossible I invite you to dinner. I call Moughte my home and if you plan on spending any amount of time there I do hope you’ll consider accepting my invitation. I will return to Moughte the day after tomorrow. This is my card.”

The arm disappeared into the darkness and reappeared holding a business card out to Kappy. She took it carefully and looked at it. It had the name “Pope” scrawled on it in angular black letters, and underneath was an address.

“Dinner the day after tomorrow. I hope to see you then and if not I wish you good fortune on your journey.”

The window rolled back up and the car drove away in a spray of loose dirt.

“Why is everyone obsessed with this robot?” asked Miles, watching the car drive away.

“Same reason we are I suppose,” said Kappy. She patted the robot reassuringly. “Either way, we’re not taking that chance of losing him again.” She dropped the business card in the dirt.

“He has good taste in cars,” said Miles, looking longingly after the receding vehicle. Kappy put her tub into gear and lurched away down the road. Miles made sure she wasn’t watching him, then quickly hopped down from his tractor and scooped up the card before following her.

One thought on “Forgotten Rust: Chapter 14”