On the road to Taggen

Taggen was two long days away. The road they were following cut its way through the landscape, winding around hills and down through canyons. As the hours passed the landscape continued to change. The trees lining the road were larger and healthier looking with less bare branches and more foliage.

Kappy and the boy had camped in an open field the first night, the boy lighting a small fire and pulling out a sleeping bag. Kappy had gotten the boy to help her lift the robot into the back of her tub where the robot slowly bounced in circles, confused, and trying to escape its tiny prison.

Kappy and the boy ate dinner without writing anything to each other. The boy had grown more and more irritated with Kappy as she and her robot had slowed his normal pace considerably. The delays were due to the robot’s inability to avoid obstacles lying in the straight path it was following. As the trees grew denser Kappy found herself constantly having to stop and disentangle the robot, dragging it back into the open where the robot would hurry off again as if nothing had happened.

The boy never offered to help, but would sit watching, his expression one of long suffering. Exasperated by his attitude, Kappy had finally written to the boy letting him know that he didn’t have to wait and could make his was to Taggen without them. The boy had just shaken his head, writing he wasn’t about to abandon a girl in the wilderness. Kappy had briefly contemplated shooting him with her heat rifle, but decided against it.

Kappy and the boy went to sleep early that night and Kappy woke only once as the robot’s bumping somehow managed to start the tub and the robot rumbled away in Kappy’s vehicle. She’d jolted awake and managed to chase the tub down, pulling the robot from the back and tying it to a stake instead. Heart still racing, Kappy had crawled back under her blanket, glancing at the boy who hadn’t even stirred.

Early the next morning they started on their way again. The second day dragged by as slowly as the first and the boy grew more frustrated with his traveling companions with each passing hour. By his estimate, Kappy’s constant delays had added at least another day to their journey.

By midafternoon they found themselves traveling through a series of wide canyons, the road enclosed on both sides by a forest of bushes, bristling with leaves and dead branches. The canyons blocked the wind and the sun high overhead made everything hot and muggy. The boy was slumped forwards, arms resting on his steering wheel, his mind elsewhere. The robot trundled along in front of him, surprisingly making its way along the road for once.

There was a flash of color among the dull green of the bushes lining the road. There was something moving towards the road. It took a moment for the boy to realize what was going on, and by then, it was too late. Four dirty looking men rushed into the road, pointing guns towards the approaching travelers. 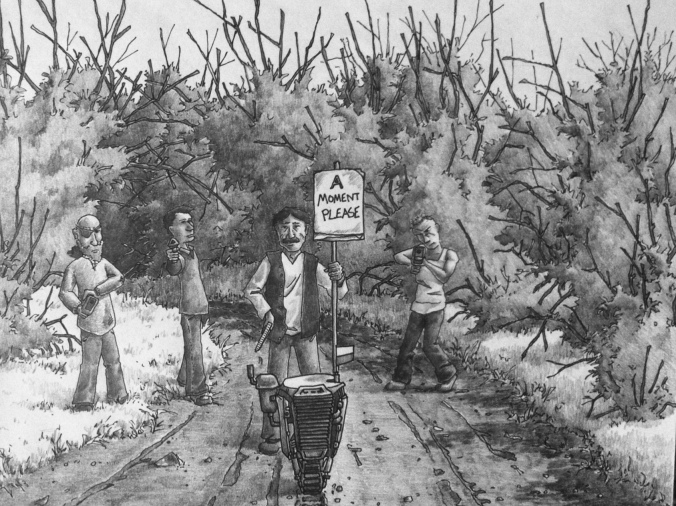 The boy had managed to pull his own rifle from the back of the tractor and held it pointing towards the group of men, almost managing to keep it from shaking. The man in front looked to be the group’s leader. He had long dark hair, a bushy mustache, and held a sign that read “a moment please.”

He calmly stood there in the center of the road until the robot rolled up to him. He stopped the robot with a hand, pulled out a wad of paper and began writing, using the top of the robot as a table. The boy took this opportunity and risked a glance over his shoulder. To his shock the road behind him was empty. Kappy had disappeared.

The man finished writing and held up the paper. “Hand over the bags, the tractor and the robot… we’ll let you live.”

The boy tightened his grip on his rifle. He knew there was very little chance of these men letting him live once he let go of his gun, but one against three was suicide, especially exposed as he was on top of his tractor.

His line of thought was interrupted as a man at the back of the group was suddenly lifted off his feet and flung into the weeds at the side of the road. None of the other three noticed as they were all focused on the boy, waiting to see what he would do.

In a blur of limbs, a second man joined the first. This time the movement attracted the attention of the third member of the group, a man wearing a ratty white tank top. He glanced to the side and his eyes grew wide when he saw his companions. He grabbed his leader by the arm, trying to get his attention before he too was knocked to the dirt road.

Startled, the leader turned, staring in shock at his fallen men. Before he had time to react the sign he was holding exploded into a cloud of paper and the leader was sent sprawling. He rolled over once and was still.

All this had happened in a matter of seconds and the boy was left sitting frozen on his tractor, trying to figure out what was going on. Smoldering fragments of the sign floated in the air and the word “please” lay among the motionless bodies.

The boy glanced around. The robot was moving off down the road and bushes stood motionless in the dull heat of the afternoon.

Then a movement on the valley edge attracted his attention. A figure was getting to its feet and was waving at him. It was Kappy. He could see she was holding the long barreled heat rifle she’d packed into the tub. She motioned for him to stay put and climbed into her tub, disappearing down the hill. She appeared a little while later, coming up the road behind the boy, a smug look playing across her face.

She held up her notebook as she passed the boy. “You were right! There were bandits! Good thing I stayed behind you!”